Last time we visited Yosemite last year, there was a great forest fire happening, coating Yosemite with an eerie, mysterious aura. And yet Yosemite was beautiful, it’s so majestic and gorgeous…we could not take a single bad shot of Yosemite during the three days of varying degree of forest fire containment when we were there. This time, there’s no forest fire, however we still got to experience three different kinds of weather when we were there during April 25 – 27, 2014. It was a fun adventure; we did several leisure hikes (they lasted 2 – 5 hours) under the rain, snow, melting ice, and sunshine. Thank God we’re prepared with our hiking gears so we could enjoy this gorgeous Yosemite Valley at Yosemite National Park!

We arrived on the evening of April 24 and the air was getting humid and heady, and sure enough, it was raining the whole day on Friday, April 25. The rain stopped the day after, but the clouds stood watch, snow and ice remained on sight, melting slowly…giving Yosemite that fresh spring glow. That Saturday, April 26 was truly a gorgeous day to be enjoying Yosemite Valley to its fullest. Sunday, April 27 was a sunny day with clouds, and on that concluding day, after taking breathtaking view one after another, pictures after pictures, it’s clear that Yosemite National Park is one of the greatest places in Earth. No wonder it’s world famous, stealing people’s hearts everywhere and beckoning them to come back time after time.

Friday, April 25 – Due to rain, Chris and I had very limited time to take out our cameras and phones to take pictures…the wonder of that day was recorded in our minds and hearts. But here are glimpses of the rain/snow we experienced when we went up to Vernal and Nevada Falls. Due to the increasingly windy and mixture of icy rain and snow pouring hard on us, we abandoned our hike to Nevada Falls halfway through. Nevertheless, seeing the snow and rain pouring down during our hike up, the rush of Vernal Falls, climbing up slippery rock stairs to the top of the Vernal Falls, (unnecessarily) posing on the bridge towards Nevada Falls, and seeing the beautiful green hue of the plants were such a mesmerizing experience. When we climbed down, we quickly walked around the Lower Yosemite Falls loop. (My thighs were numb afterwards, though.) 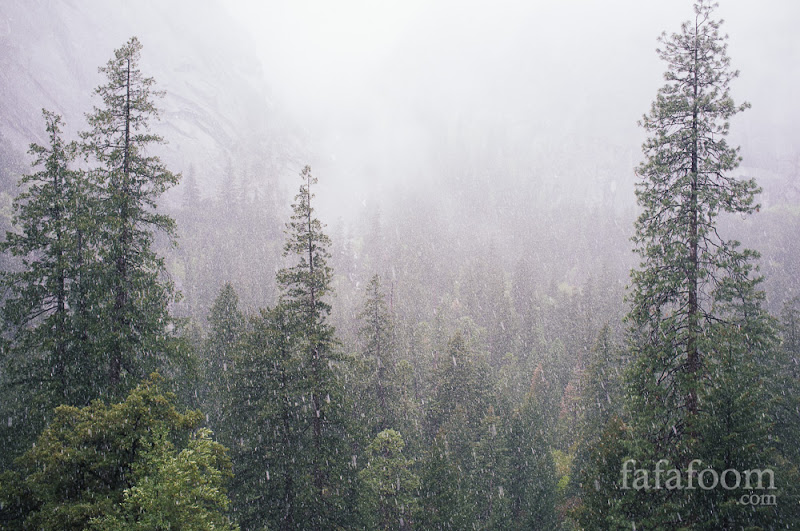 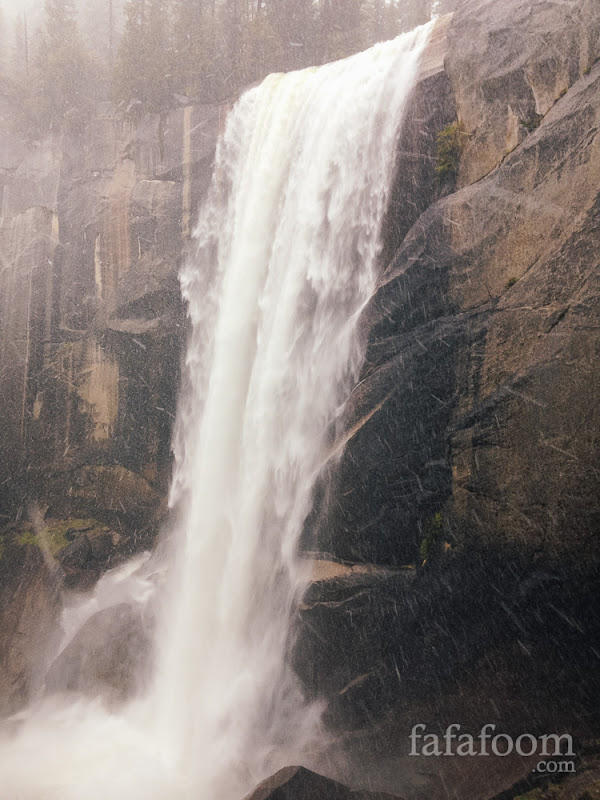 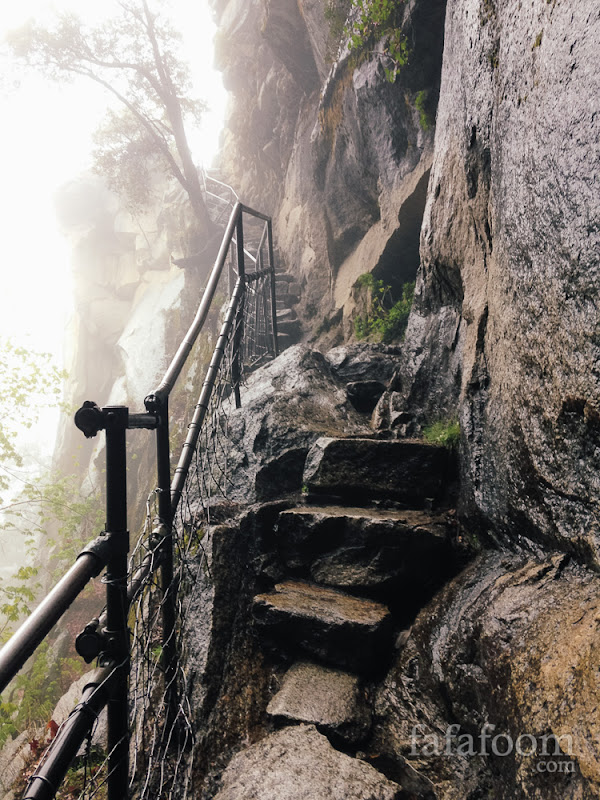 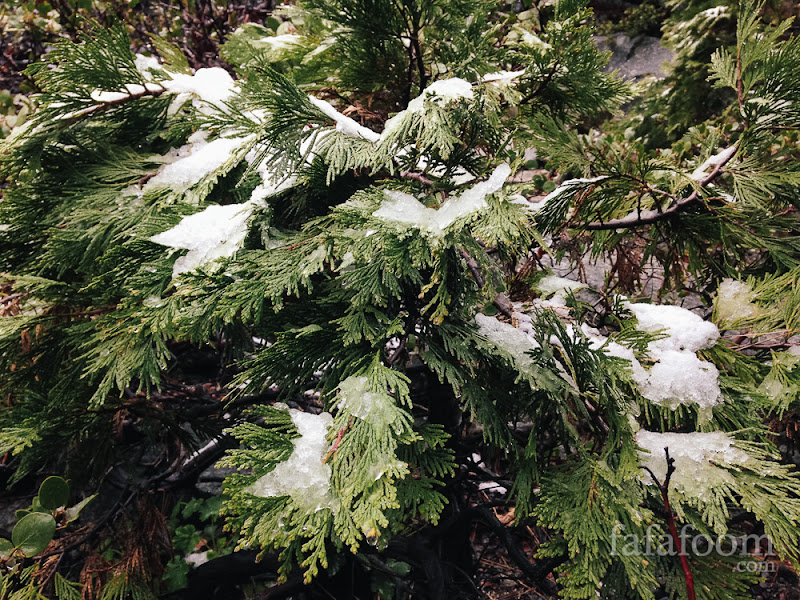 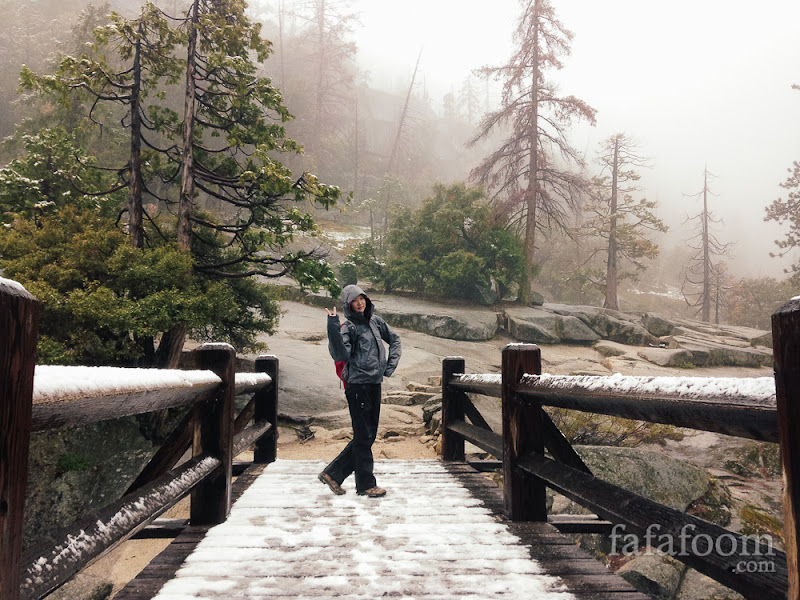 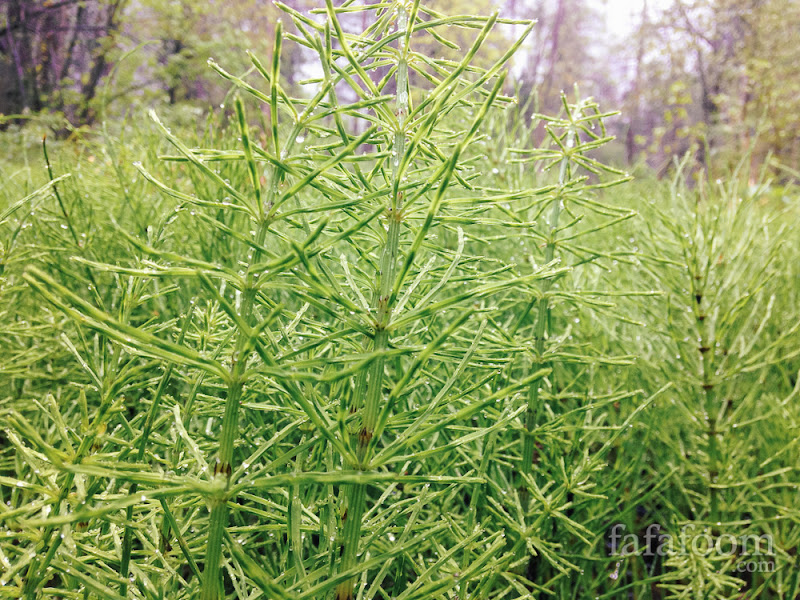 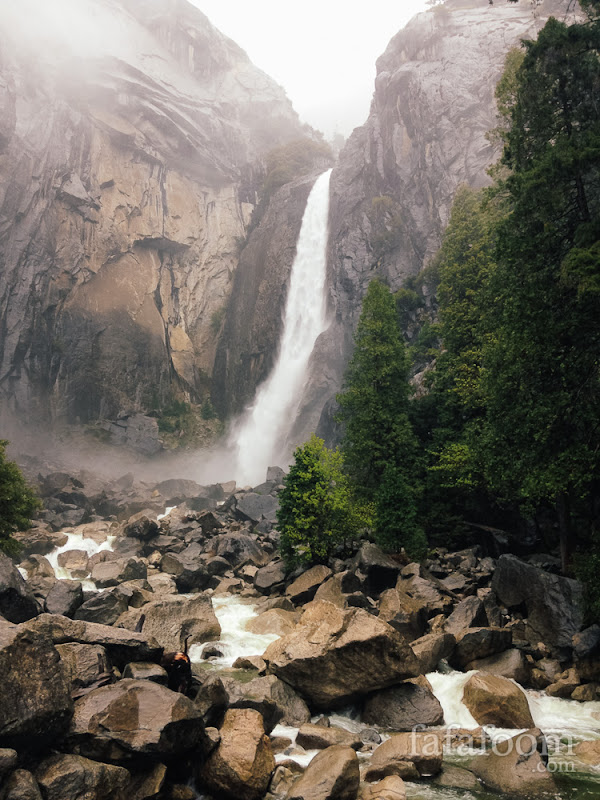 Saturday, April 26 – Oh gosh, what a beautiful, beautiful day. The rain from the day before coated the trees on top of the rocks in white powder. Before we went up the Four Mile Trail, we went to the meadows near the Swinging Bridge to take in the view of Upper Yosemite Falls and snow-covered trees on top of the rocks from the valley floor. As we went up the trail, the refreshing green hues of moss greeted us, and they quickly changed to white snow and falling icy bits from the trees as we gained elevation. Getting higher up meant seeing the Upper (and Middle) and Lower Yosemite Falls in full view, surrounded with tree branches carrying snow, and it’s just. so. worth the hike! The valley view from up there was also…my gosh, so beautiful. Shortly before we reached Union Point (the trail past that point was closed due to ice and snow), we turned back since we’re hungry and Clif bars were not enough for Chris :)

After lunch, we went around the Mirror Lake and Snow Creek Trail loop, where a group of tourists informed us of a rumored bear sighting (we didn’t see any, though). The Mirror Lake was great, unfortunately the water was not high enough to give the famous “mirror image” effect. Still, the views were still gorgeous…nothing to sneeze at (unless you have spring allergies like I do). We also encountered a rock corner which was like an exhibition gallery of human-made stone formations (so cool)! And while we did not see any bear, Chris spotted a coyote near the horse stables, and we got some pictures of that beauty, too. 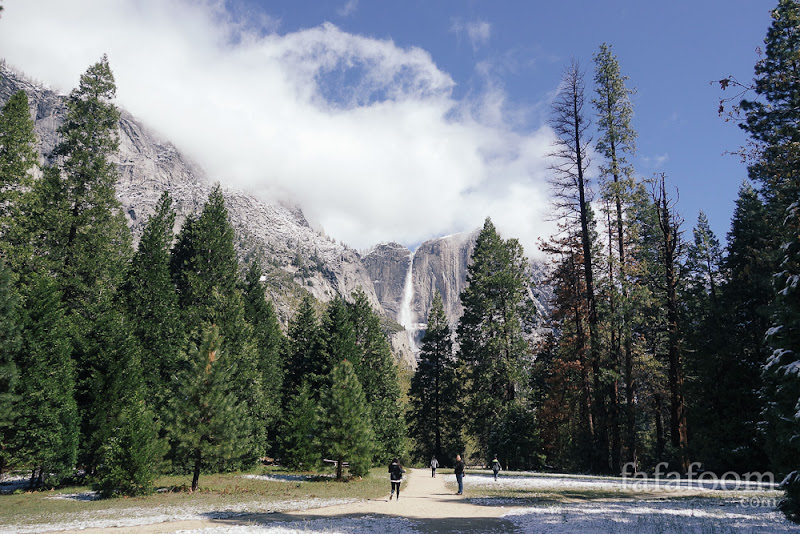 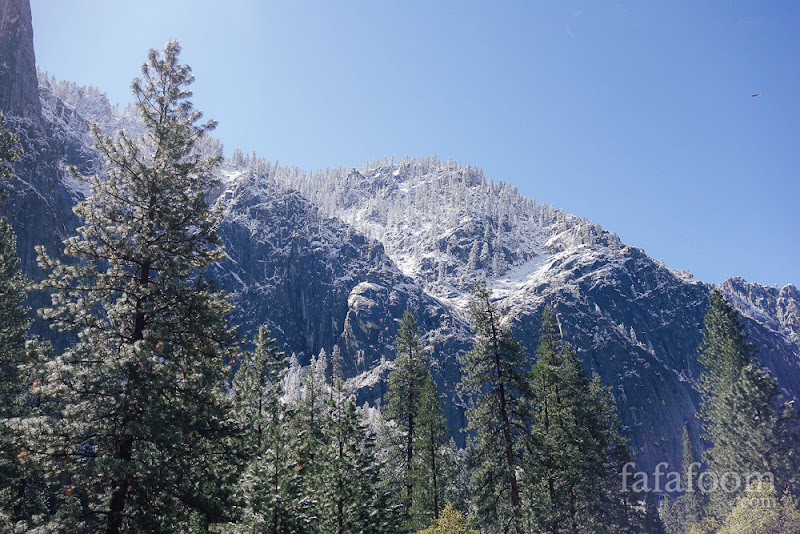 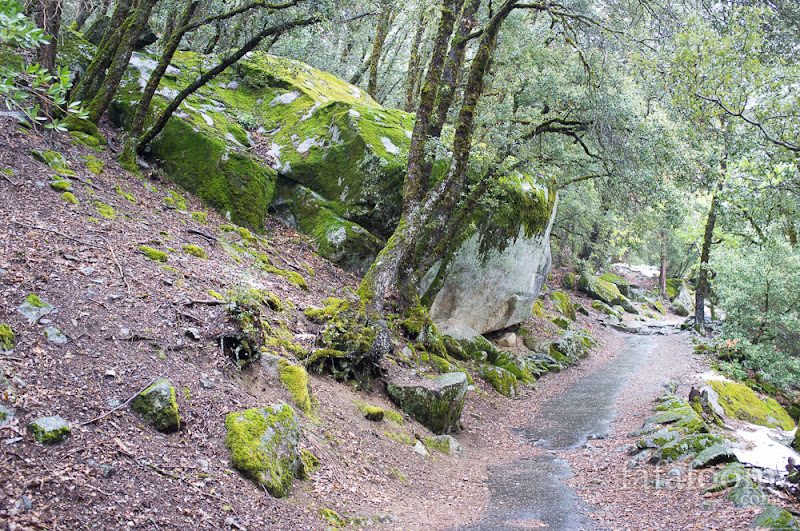 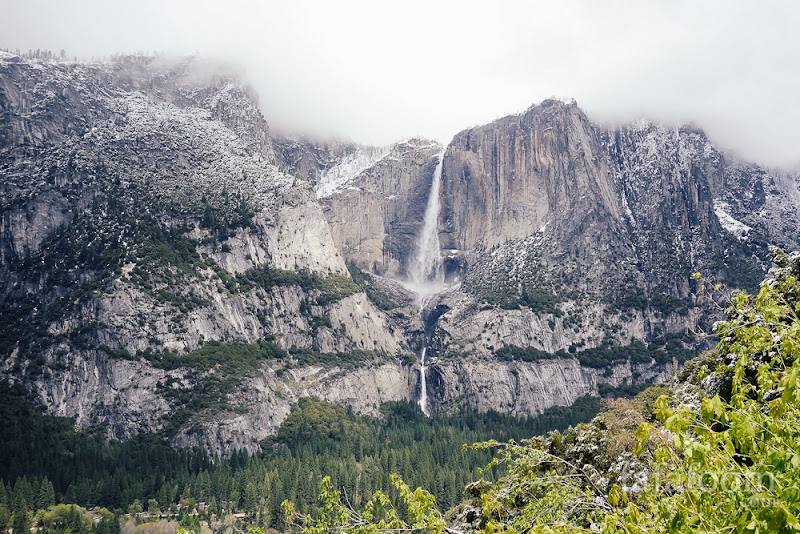 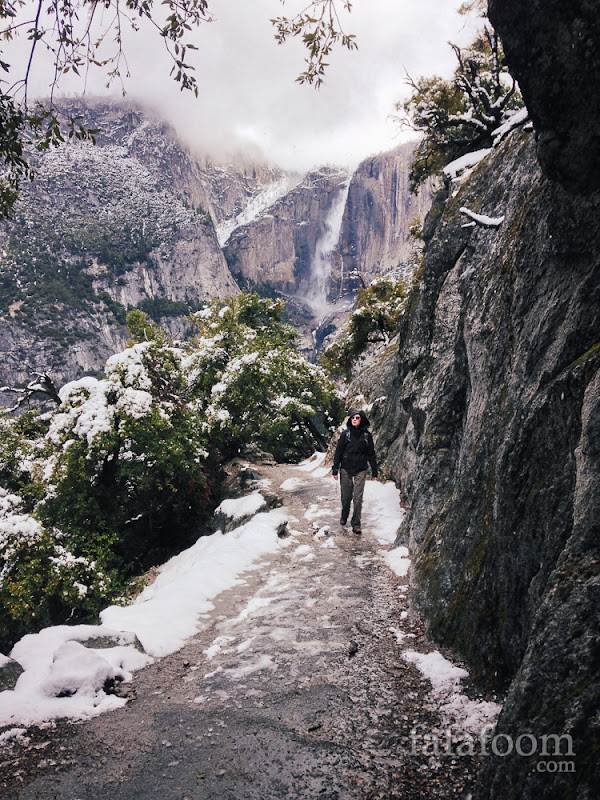 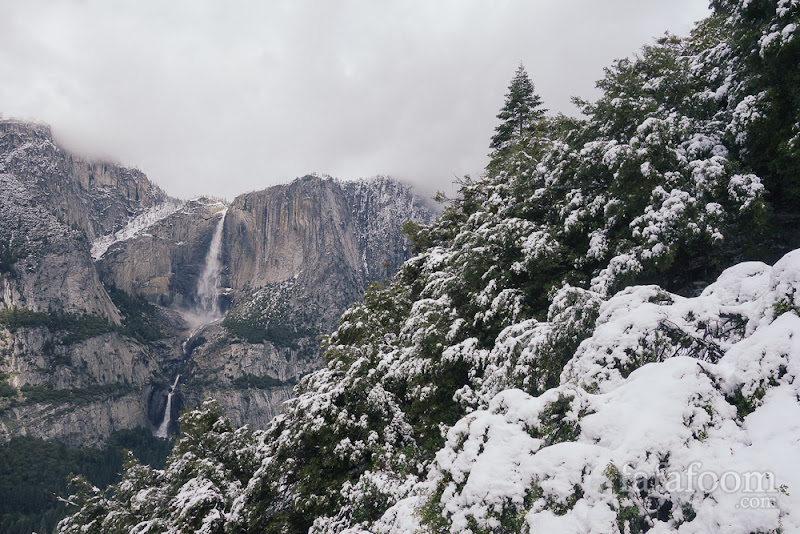 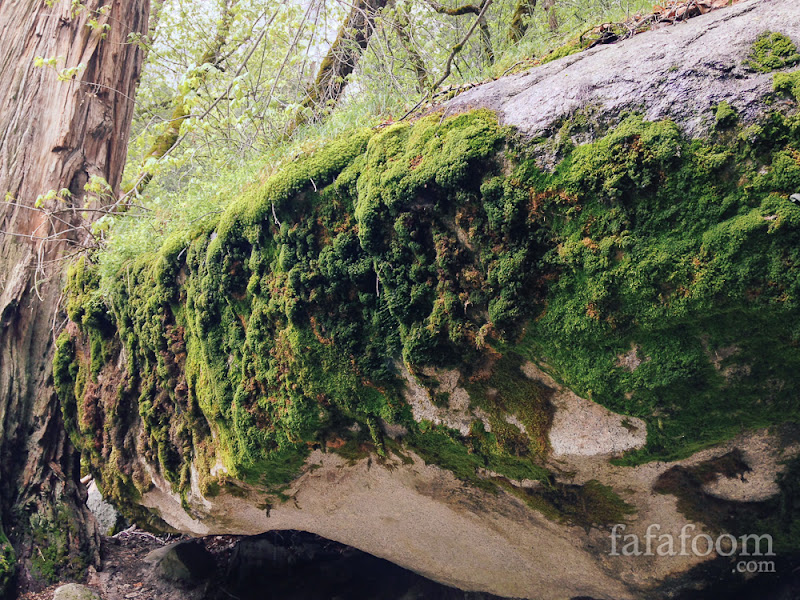 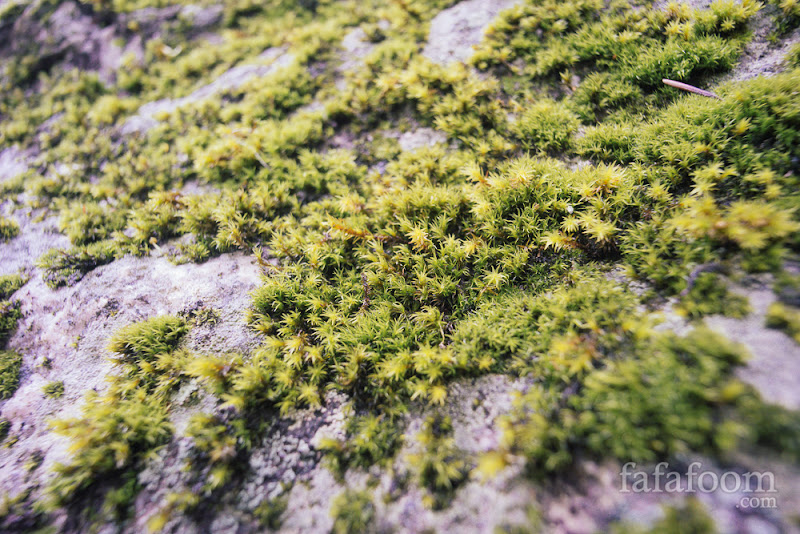 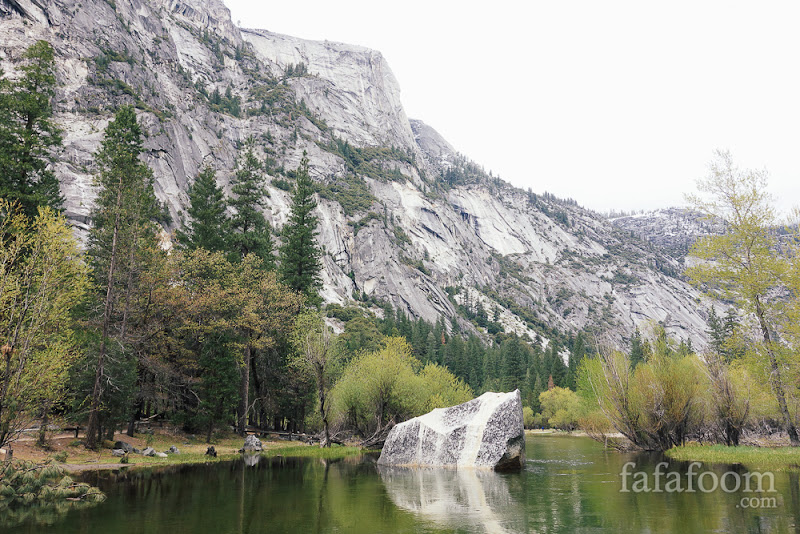 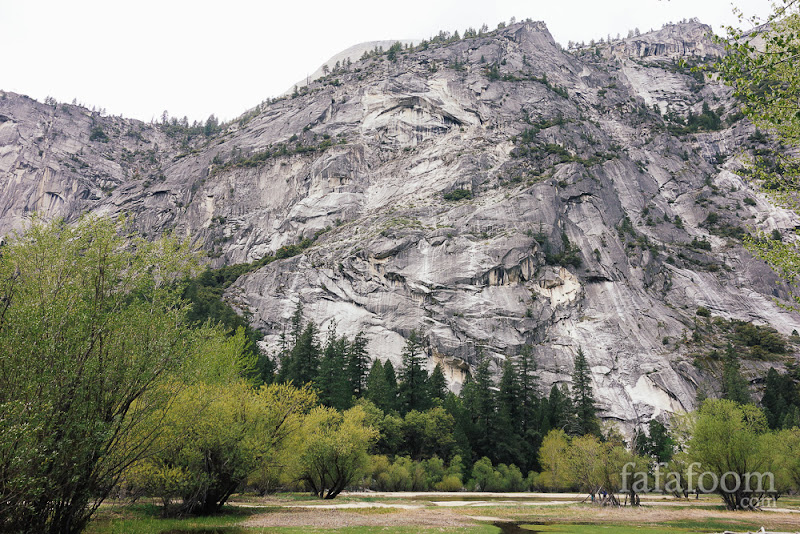 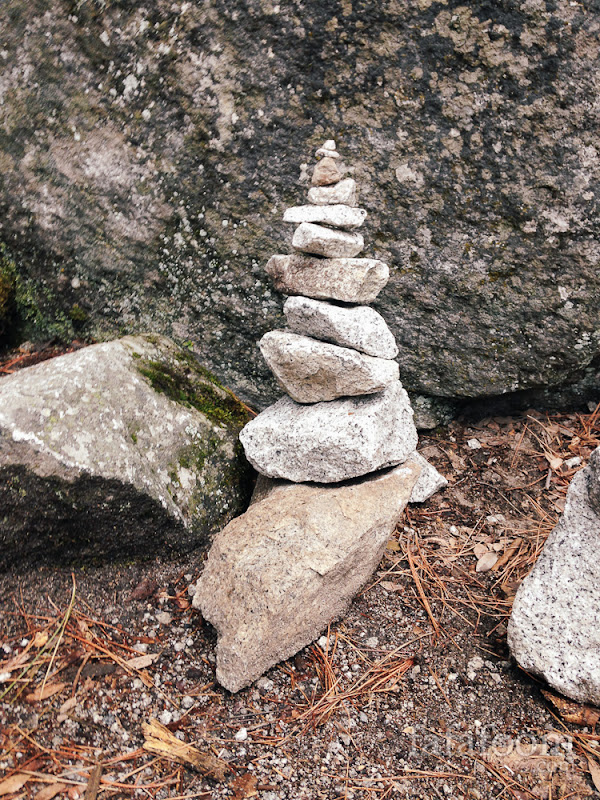 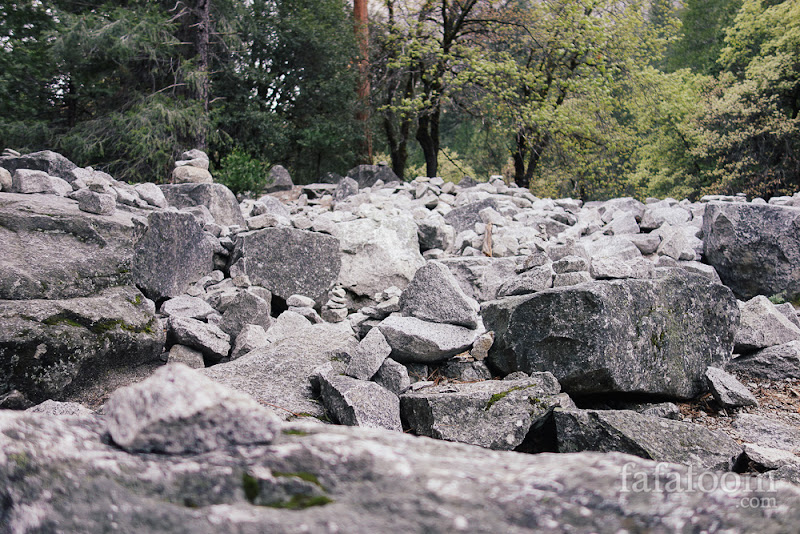 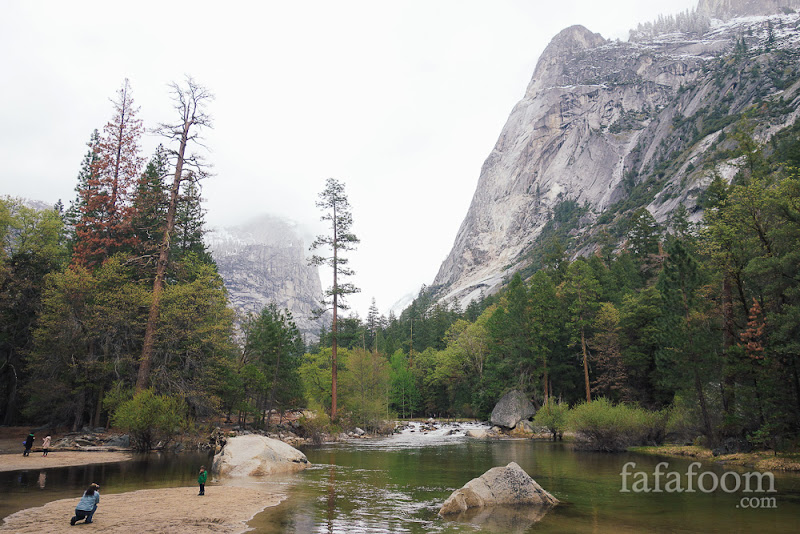 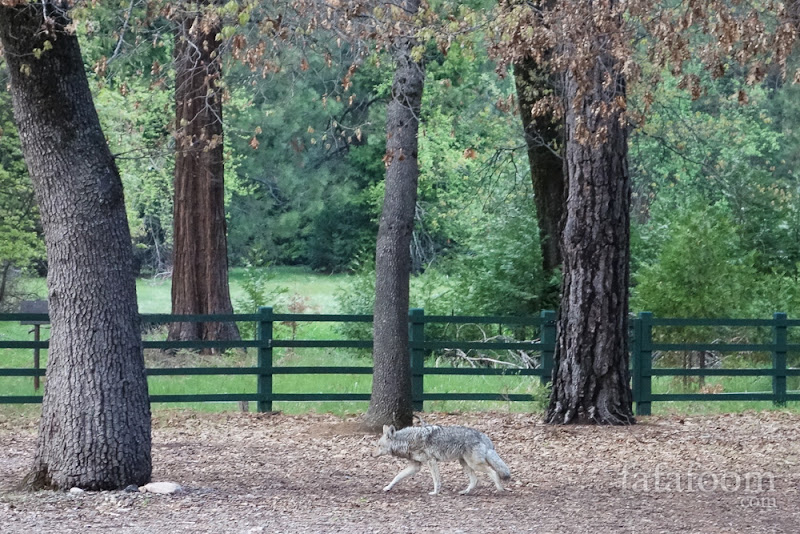 Sunday, April 27 – If Chris and I are morning people, we could’ve done the whole Upper Yosemite Falls Trail that day. Alas, we’re not, so after visiting the famous Tunnel View (unfortunately, Glacier Point Road was still close for snow/ice removal), it was a little after noon when we started our way up the trail. Still, stopping at Columbia Rock (1/3 of the way to the end of the trail) to take in the 180 degree view of the Half Dome and the surrounding rocks and trees on the valley floor, which looked like miniature models from up there. On our way out of the park, we took one more glance of the Yosemite Falls. 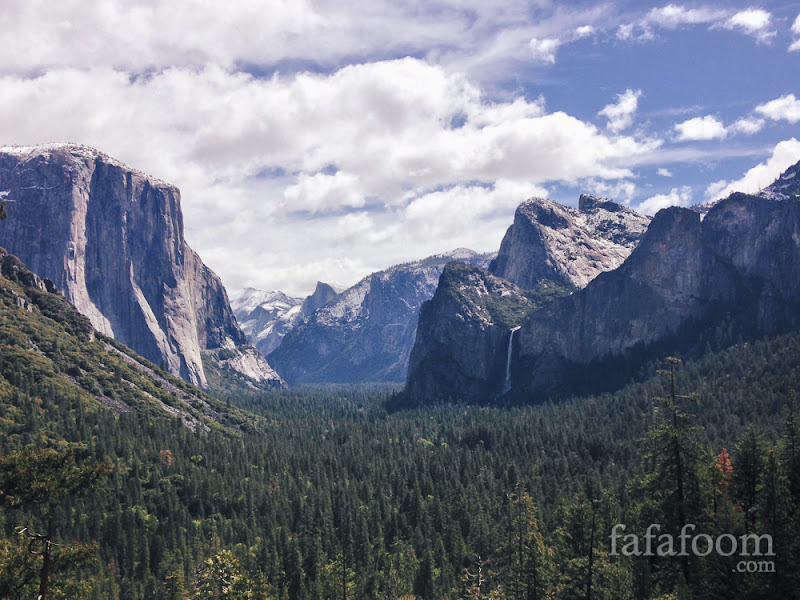 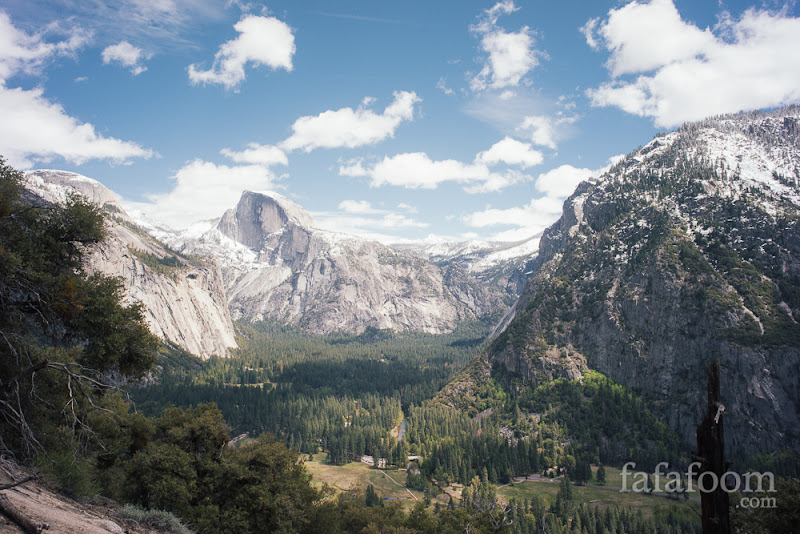 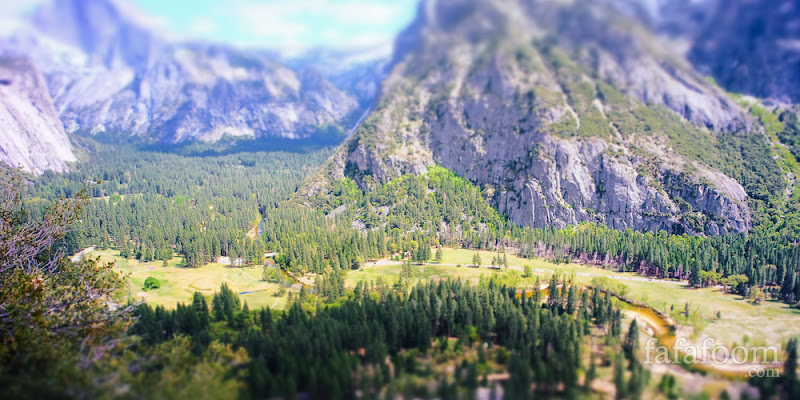 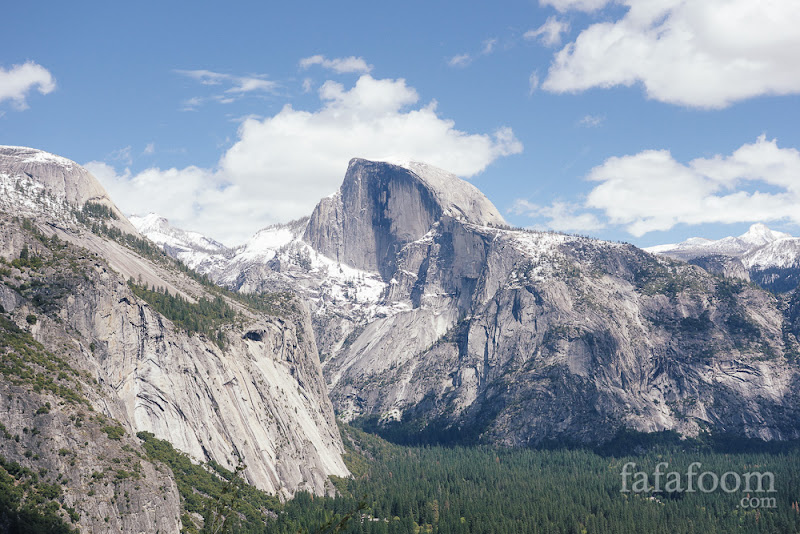 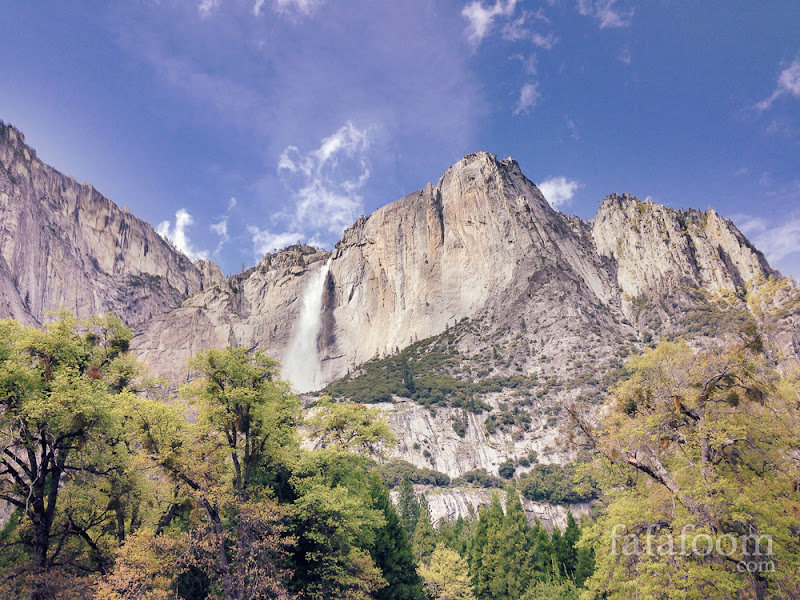 Ah, I will definitely come back to this amazing place! See you later, Yosemite.

Thanks for reading, until next time,
Musank